It HAD to be Kovalchuk

Earlier tonight, on the heels of bludgeonings at the hands of the Detroit Red Wings and a team that I’m vaguely aware of that apparently plays in Carolina, the Edmonton Oilers squandered a 3-1 lead against the New Jersey Devils and walked out of the Garden State with an overtime loss. The game-winning goal was scored by the currently maligned (but still obscenely rich, so suck it, commoners) Ilya Kovalchuk. And it had to happen that way. 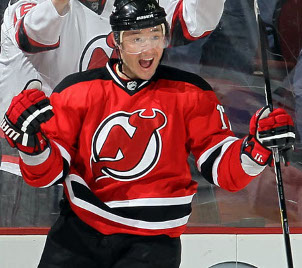 "Oh my god, you guys, remember when I played on an awful team and did that all the time!?"

The Edmonton Oilers are streak-breakers. Is your team on a big winning streak? The Oilers will miraculously eke out a victory in a game they have no business winning (ask the Sharks from a couple of years ago and watch Evgeni Nabokov die a little inside). Is your team on a losing skid and your star player only marginally more useful than a potato whittled into the shape of a skate? Well, the good ol’ boys from northern Alberta will lend a hand. And they sure did tonight.

Maybe you’ve heard, but Kovalchuk was in coach John MacLean’s doghouse and saw himself scratched from a recent contest against the Buffalo Sabres. I suspect he was confused by the lack of leg room in MacLean’s mutt mansion, since Kovie’s dog’s house is bigger than most people’s car. And diamond-studded. Did I mention that Kovalchuk signed a $100 million contract last summer? That’s kind of relevent. Because after 8 NHL seasons with a team from Atlanta that I only recently found out is named after a bird, Kovalchuk is now expected to get Devils fans acquainted with a thing called goal scoring. You know, that thing that nobody used to be able to do against Martin Brodeur? Coming into tonight’s game against the Oilers, Kovalchuk had a whopping three goals and an incredibly embarassing shootout flub against the Buffalo Sabres to his credit. His Devils hadn’t won a game at home all year. Good thing the streak-breaking Oilers are in town!

You see, Kovalchuk HAD to score the game winner tonight. A seven game goal-less streak, a seven game losing skid at home, and that disaster of a shootout attempt in Buffalo? There was no way the Oilers were leaving the Garden State without breaking those streaks like Joni Pitkanen broke Andrew Cogliano’s face in Raleigh. And yet, they teased the audience. Kovie was held silent for most of the night, with all of his chances thwarted by Edmonton defencemen who had evidently been taught by Tom Renney that they could use those hooked pole things that they carry to take the puck away from opposing players. But then overtime hit and Dustin Penner knocked out Kovalchuk’s legs, sending him sprawling to the ice because dammit, taking those two extra steps to splatter him into the boards legally was just too much for the big man’s heart to handle. Kovalchuk drew the penalty. Right then and there I knew it was going to happen, no matter how much I would have preferred him to trip over Martin Brodeur’s talent (he leaves it on the bench now) and knock himself unconscious. But instead he fired a rocket off the goal post and past rookie back-up Devan Dubnyk.

Time to go research the top prospects in the 2011 draft while weeping into old photos of Wayne Gretzky.

This entry was posted in Fuhr and Loathing and tagged Edmonton Oilers, Ilya Kovalchuk, New Jersey Devils. Bookmark the permalink.